OK – I have to admit I spent the last three weeks a bit lost there. Despite the fact that I have tried different kind of sensors, none of them did the job for me: it was about that precise interaction I wanted to pin down. After being through a slump I named inert-eraction, I had this “Euraka!” moment I still shall doubt every 15 minutes during any next brainstorming. Nevertheless, I got the missing element I was looking for my meditation device ↓↓↓ 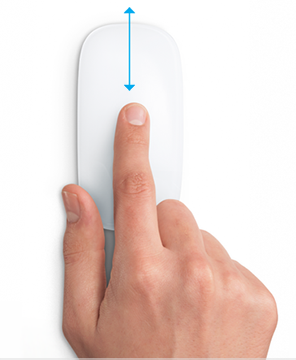 Yes, the scroll gesture – be it with the mouse, the touch pad and the smartphone. I’m not sure how exactly I ideated it – maybe when I was myself scrolling down and thought “I’m not moving much, am I?“, but I already had precise thoughts: I wanted an actual pause of movements without any physical sensors. The digital gestures match that! Why not using this gesture as the main interaction of my object?

Plus, the way we relentlessly stare at screens almost makes me think of a trance. For example, how many of us has been binging-watch series without noticing the hours passing by? Surfing on the Internet might then be a kind of non-conscious meditative state. The relationship between the perception of time is very interesting here, and the Slow Movement is indeed encouraging time mindfulness – I’m taking back my time lost in scroll-trance by scroll-meditating. Here it’s about the mean!

Thus, I need a touch pad to scroll on. When I explained my concept to Nicolas on this morning’s tutorial, he encouraged me to create a low-tech touch pad. He mentioned that I could use conductive fabric but advised me to first try out a DIY version using foil.

We talked on my thoughts of how these gestures are related to types of cognitive and psychological responses in their interactions, and how my device could end up creating another type of gesture. So far, I’m only aware of the research project and book Curious Rituals by Nicolas Nova, Katherine Miyake, Nancy Kwon and Walton Chiu.

I found books that are more and less related, though: The Best Interface is No Interface by Golden Krishna, and Irresistible by Adam Alter (this article found on the Guardian is a good review of its). Both gives a different insight of the gestures we use with our digital devices; the first about how we get through the interface by designing better interactions, and the latter about how this interface get us addicted. Exactly the contrary of what I want to accomplish here, by taking the gesture down to another type of interaction.

Although I now know what I want my device to be, I still don’t know its output: sound, light, both? I mentioned the fact that I’m pretty influenced by James Turell in my works, and my wish to create an immersive experience using light.